“So this girl, Yani, attended English class at Almanar, did she?,” the lady was looking at Pak Cik askance. “That figures out,” she continued before I had time to reply. Her puzzled expression began to change as the answer began to dawn on her. She had just been transferred to this school as its Head.

That scene was in a room of a secondary school 11 years ago. Pak Cik had come to introduce myself to the new Principal in the first instance, and to find out the 1998 PMR results which had just been released. A small group of 12 Almanar pupils were involved.

“I’ve been puzzled by some odd results of this school. This girl, Yani, for example, scored grade A in two subjects only, English and Bahasa Malayu, Nor is another one like her. ” Now she knew the answer to her puzzle was the class at Almanar. In this locality, a pupil is more likely to get A grades first of all in any other subjects like Pelajaran Agama Islam, Sejarah, Kemahiran Hidup, etc. before an A grade in English. Furthermore, Yani did not show any flare in that subject in her UPSR exam three years earlier. She did not have a family likely to help her.
After completing her SPM, Yani gained entry into UITM to do a course in tourism following which she acquired some experience working for a couple of holiday resorts. Then came her break when she was given a job as a lecturer in tourism at a private college. After proving her worth, she is now the head of a department. Today, still determined to improve herself, Yani is pursuing a degree course in Food Service Management. Compared to the achievement of many high performers we often read about, there is nothing glamorous in what this girl has managed to do unless one understands her background.

Pak Cik can claim to know Yani and her family well enough. She and three others sisters attended classes at Almanar. Two elder sisters are working and her younger one is doing a nursing course. I call their father ‘Pak Mat’ although many villagers know him as ‘Pak Yas’ (for Alias). 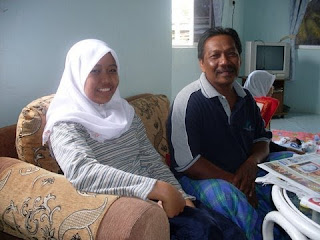 The proud fisherman and his daughter

Pak Mat, now 59, came from a typical fisherman family. As a boy of 16 he started to follow his elders, going as far as Tanjung Dawai in Kedah to fish ‘ikan bilis’. Being a junior he was paid only half what others earned although he claimed to have laboured no less. It was years later when he was paid the normal share of an adult member. That was FORTY-THREE years ago. Today he still goes fishing. Pak Cik worked for THIRTY years, mostly in the comfort of air-conditioned offices – and I have had enough of it!

“I will never depend on my children for money as long as I have the strength to go to sea,” he responded quite firmly when Pak Cik suggested that, perhaps, his children would now support him and wife. I know his children do not fail to give him money, but Pat Mat is too good a father to sit back relying on his children and, above all, he is a proud fisherman, proud of his profession.

A year ago Yani dropped by our house. In her hand was an invitation card to her own wedding. It was not a surprise to Pak Cik and Mak Cik. She was ready for it. And it was no surprise too when Yani turned up at our house again a day before the recent Hari Raya, this time with a smart HUSBAND and a healthy BABY BOY hardly two-months old. 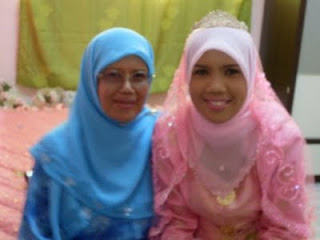 The bride and Makcik

Will Yani’s boy be following his grandfather’s footstep? No, not likely, and I doubt his proud grandfather will ever regret it either – that none in his family will ever go to sea again. 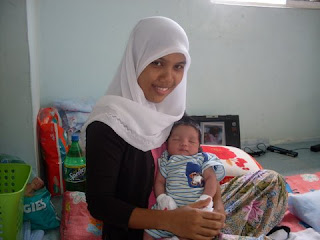 Dear Pak Cik,
You have surely made a difference to the lives of many who would have otherwise remained locked in their hereditary traditional ascribed life of that vicious circle.
May you continue to do so and only ALLAH S.W.T. bestow you with good health and the drive for the improvement of the less privileged. I salute you!

aslmkm.Always enjoy reading your entry...you must so proud of Yani..

oboy.. why do you have to always make me shed tears..? But i'm not complaining in this instance, for these are happy tears..

abdulhalimshah,
After the happy festive season you have written about the world natural disaters and how grateful we should all be in Malaysia. Unfortunately, even among our own people there are still the less fortunate for whom our little help can mean a lot.
Pakcik

You visit us often. Thank you. Pakcik would certainly like to get better acquainted with the owner of gayong. Would you care to use my e-mail address on the cover page?
Pakcik

It is a simple story, one that you know too well in your old part of the world. This is where a drop of tear means a lot of happiness.
Pakcik

Salam Pak Cik,
A touching story again which we normally read between pages of a novel.But this time for real.
Again I ll definitely share this with my murid kampung...just to give them a bit of motivation as exams are around the corner.
p/s I ve responded to your questions in my blog.

Pakcik
Thank you for writing that. Look forwards to seeing you and Makcik.
Yani

I suppose a large number of your kampong children are from farming community. No wonder you seem dedicated to what you are doing despite the isolation - a heart of gold indeed - and that gives me a sense of admiration.
Pakcik

There are, I am sure, many more "Yani" stories to share. Wouldn't it be nice to have every story written and compiled into a book. The book will be a good read for every one - a child who always complained he never had enough and a parent who gives too much!

Now, now, do not give me ideas to be swollen-headed! Do your cycling book first, which is more realistic. Are you going to do your Qurban, and hari raya haji, followed by X'mas celebration in Dublin? I envy you, Ramli.
Pakcik

Thank you for allowing me to write about you and family. Jagalah budak comel itu hingga menjadi wira yang berbakti. You are always very dear to us both at Nuri
Pakcik and Makcik

Salam Pakcik,
Love this story...normally when I quote this kind of story to my kids, I told them...it's not about luck or miracle...she just decide to study...that's all...

(then, I'll conclude, so kids,no wonder you didn't finish your homework, because...you just decide to watch TV...he..he...upstairs they go...before I turn into Hulk Hogan...)

I can see your devotion to your kids. I am sure, and I pray, they will grow up to your expectation.
Pakcik

Salam Pak cik,
Just wondering whether you receive my e-mail or not.I sent you one but couldnt trace when I check under 'SENT" mail.
Thank you.

Do not be surprised if mails have not come my way. I have had my share of problems with my laptop. Kindly forward me a copy.
Pakcik

Salam,pakcik.I've seen your blog for the 1st time.It is really great to know what is going on at Almanar.I'm very lucky to be a part of almanar.Pak cik,even though I do not often go to see you, deep in my heart,I always remember you.Thank you so much pak cik.
Syuhada

Makcik and Pakcik have been wondering why you do not call on us any more. One of these days we think you will tutn up, like Yani, with an invitation card! Agaknya sudah mula kerja diUHM. Sombonglah jadi orang KL
Pakcik