Hatinya baik (He had a wonderful heart) – Part 2 ( Al Fatihah)

While the world are celebrating the joy of New Year, Pak Cik would like to spare a moment thinking of how I should put it in plain words my thought of an unhappy event that took place in November, the month that saw me writing about the significance of 01-01-01, the Poppy Day (Pak Cik Reminisces Part 5), and the departure of a very dear friend, Dato' Ahmad Badri (Hatinya baik - Part 1). 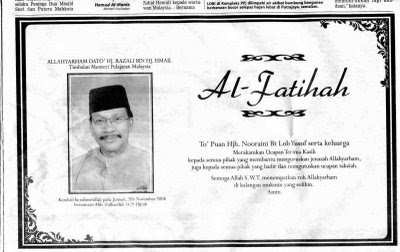 The untimely departure of Dato’ Razali Ismail was widely published. It is getting to be an old event and fading into the past. My diary today is this blog and I simply have to record something meaningful to me. (By no means Pak Cik am expecting to read this in another 50 years’ time!) I was very tempted to write about that event when the death took place but resisited it. Allah Yarham was special and I had to wait for a special time to record it hoping the effect would be special too. So allow Pak Cik to make this to be my new year posting, requesting an Alfatihah from my Almanar pupils and my Muslim readers for this very special person – hatinya baik.
Datuk Ahmad Badri (of my posting, Hatinya Baik - Part 1) left two days into the month of November. He was very close as a friend. Dato’ Razali left us two days before the end of the same month. Unlike the former I cannot call him a friend. He married into a member of my family. He addressed me as ‘Wah’ like some of Pak Cik’s nieces and nephews. Others preferred ‘Ayah Ngah’, instead. To you, my Almanar children who are equally precious to me, it has been ‘Pak Cik’. One day I will write about how I own different names!

Pak Cik will not write what has been published in our mass media. I want to be more specific of the very thing this extraordinary mortal did that touched me. It was something very personal and flattering but I do not think he realised how that inspired me to carry on with my effort at a time when I was uncertain whether the difficulty I was experiencing then was worth my time and effort. I had disapproval, believe it or not, from a number of individuals in the field of education. In fact I still have some today. You know some of them are in your own school, dear Almanar pupils.

One morning in September 2002, when Almanar was in its seventh year of existence, two cars pulled up in front of Pak Cik’s house. From one of them stepped out two gentlemen dressed in dark suits. One was the unmistakeable bubbly Dato’ Razali whom I knew too well. Following him was a tall gentleman who was introduced to me as Datuk Abdul Rafie Mahat (not yet a Tan Sri then), who was the Malaysian Director General of Education. Helding my hands firmly this important figure from Kuala Lumpur uttered something which still rings clear in my ears today, “I want to meet the unsung hero.” I was completely taken aback by that ‘unsung hero’ bit. What had this state Director of Education been telling his boss that prompted the latter to make that very special brief visit? - an important national figure paying homage to an old kampong folk.

That was not the end of the ‘unsung hero’ episode. About four months later Pak Cik made an appointment to meet the Principal of a secondary school outside my area. I had to introduce myself and my involvement with Almanar. His eyes lit up as something suddenly dawned on him. “So, you are the ‘unsung hero’ our DG mentioned in his talk!” That was Pak Cik’s second surprise. I could only guess, not wanting to show my interest, that the late Tan Sri Rafie had chosen to quote me and Almanar in his speech some time during his visit to the state.

In no small way the above episode inspired me. Unexpected recognition by people who matters in my type of activity did just that. Sadly both of them departed at a time when they could have continued to serve ‘kerana Tuhan untuk kemanusiaan’ – Dato’ Razali at 59 as the Deputy Minister of Education, and Tan Sri Abdul Fafie Mahat at 60 as the Chairman of Education Service Commission.

From the number of conversations I had with Allah Yarham Dato’ Razali I can categorically say education was in his blood. He preached what he believed and he proved that what he believed could be substantiated. He was not one who blew his own trumpet. Only those close to him knew he raised good children, his eldest being a graduate from Cambridge . He was not just a father, a teacher, a principal of a Teachers’ Training College , a state Director of Education and a Deputy Minister of Education for nothing. Many owe him something. Pak Cik owe him his simple gesture, the ‘unsung hero’ episode, that I interpret as a sign of the man’s attitude and dedication towards education. Little did he realise what it meant to Pak Cik, an inspiration at a time I needed it most.

For one who had a good heart ( orang yang mempunyai hati baik) let us pray that he is being suitably rewarded by the Absolute Creator Himself. Let us recite Alfatihah for him, for Tan Sri Ahmad Rafei and the likes of them.